Watch Hell or High Water before the Oscar Awards 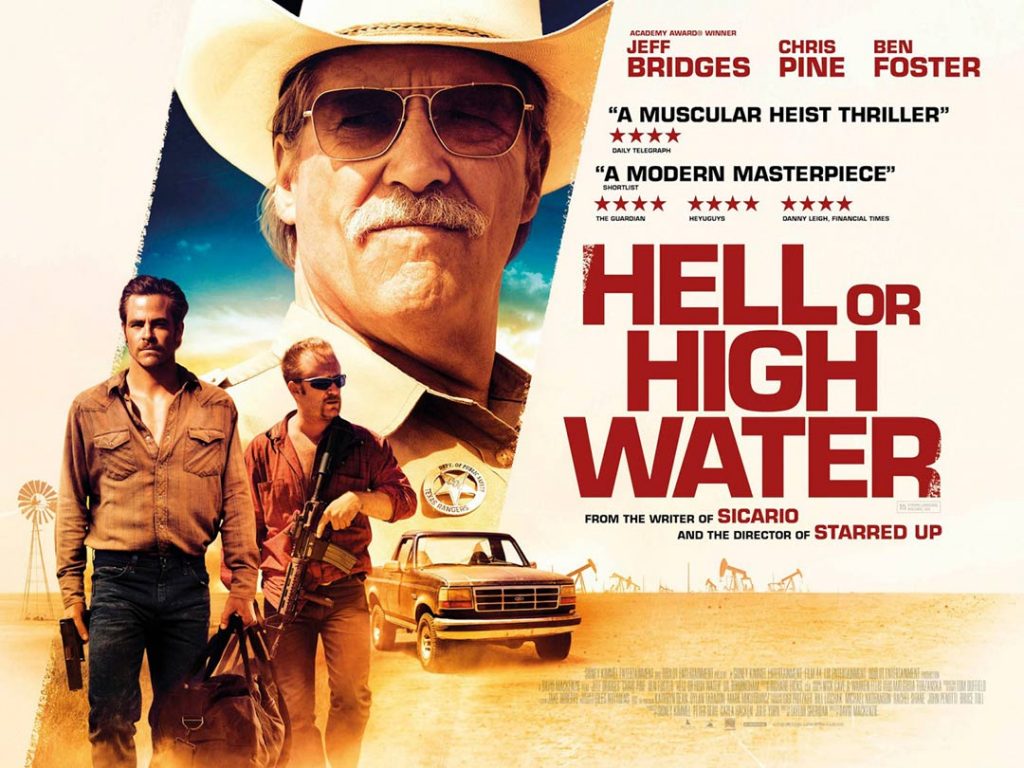 Hell or High Water is one of those movies that comes along every once in a while and energizes you in an unexpected way. I saw it shortly after it was released and it totally rocked. The cast, though small was terrific. The movie shows you what great lengths we as human beings would go through to get hold of money when all is lost and desperation sets in. It’s from the writer of Sicario, another great movie.

Hell or High Water is the story of two brothers. Toby, played by Chris Pine is a divorced father of a teenager. He is a responsible young man who is unemployed, thanks to the collapse of the Oil and Gas sector in which he works. His older brother Tanner (Ben Foster) is a no good, useless waste of air who has just being released from prison. They are in need in of money, $43,000 to be precise. Their recently deceased mother had taken out a reverse mortgage on the family ranch and the bank is set to foreclose on the property. Oil has also recently been discovered on the grounds, so of course, the bank is just itching to get the rights. To get the money, the brothers take to robbing the Texas Midland Bank branches. Poetic justice in a way as this is the same bank that is set to take their home.

After two robberies, Texas Ranger Marcus is put in charge of the case since the FBI is not interested in such a petty case, just $7,000 was stolen from the bank. Marcus goes at the case with gusto. He is being forced to retire and hopes this case would buy him a bit more time. His partner is a bi-racial man (Indian and Mexican) and has to put up with the racist comments hurled at him by Marcus. He gives as good as he gets though and you can see the warmth and mutual admiration between the two men.

I don’t want to give away all the movie, suffice to say that you will not get bored. It is a bit hard to understand Marcus’s  southern accent so you have to listen intently. When things go awry during the getaway, thanks to nosy gun carrying Texas citizens, bullets fly and people get killed. It’s weird because you are supposed to root for the good guys, but l found myself empathizing with the bad guys. I wanted the brothers to screw the bank, and you gotta love the fact that they want to pay the bank off with the same money they stole from their branches :-). The feel of Hell or High Water is a drama mixed with a western. The ending is absolutely fantastic.

Hell or High Water got 4 Oscar nominations, including a Best Supporting Actor nod for Jeff Bridges which l think is very well deserved. It was a movie done on a small budget. The story shines though, as does Chris Pine, Ben Foster and Gil Birmingham, the partner to Marcus. The photography is also gorgeous. With a 98% score on rotten tomatoes,  I recommend seeing it before the awards ceremony. It terrific!

Have you been able to watch Hell or High Water? If yes, what did you think? If not, does it sound like your kind of movie?

Introduction to your WordPress Dashboard

Why You Should Make Everyday Remarkable Earth Day